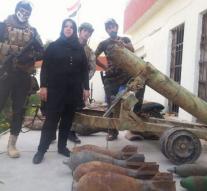 shirqat - The 39-year-old Iraqi Wahida Mohamed is the most searched person on the list with Islamic State. The woman would be the death of many IS members in its name. That reports CNN.

Wahida Mohamed, also known as Um Hanadi, calls himself housewife and leads a militia of about 70 men who IS resisted the terrorist attacks of. The group operates from the Iraqi city of Shirqat. Recently, she helped government forces to wipe clean the city of IS.

Mohamed began in 2004 with the fight against terrorism with Iraqi security forces and the coalition. Thus she took the anger on the neck of al Qaeda, which later turned into ISIS. Mohamed received threats of IS leaders in the hope that she would cease her struggles. They even got IS leader Abu Bakr al-Baghdadi threats. \'But I refused. I stand at the top of their most-wanted list, \'says the terror best rider. Um Hanadi was then itself a target of IS-attacks at her home. \'In 2006, 2009, 2010, three car bombs in 2013 and 2014.\' She herself escaped several times to death. \'Six times they've tried to murder me. I have shrapnel in my head and legs and my ribs were broken.

Some people around her were less fortunate. Her first husband was killed during fighting. Earlier this year, her second husband died in the fight against IS. And she has already lost her father and three brothers. Then she took revenge. \'I fought them, I beheaded them, I cooked their heads and burned their bodies. Just look at my Facebook page, \'says Wahida Mohamed proudly. Whether it's all true, is not to trace. Meanwhile removed her profile from the social media.