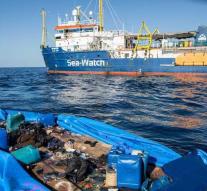 rome - Averij has delayed the departure of the controversial ship the Sea-Watch 3 to a port of Sicily. The vessel with 47 migrants on board was struggling with the anchor causing the voyage...

It is expected that the ship will arrive at the port of Catania on Thursday afternoon. The vessel can go there after the Italian government has agreed with a few other European countries on the distribution of migrants. The ship bobbed five days off the Italian coast because it was not allowed to moor anywhere.

The Sea-Watch 3 sails under the Dutch flag but is from a German organization.