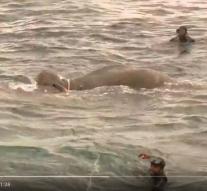 pulmodai - A miraculous rescue operation in Sri Lanka. At least eight miles from the coast, the navy saved a lost elephant out of the sea. The beast was presumably hit by the strong currents on the northeast side of the island.

A naval spokeswoman speaks of a 'miraculous rescue action' that took about twelve hours. On pictures and a video it can be seen that divers try to fix cables to the animal. It is not clear whether the elephant was then dragged to the shore or, at some point, managed to reach the mainland on its own.