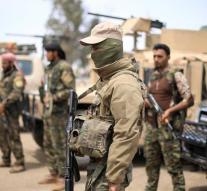 - The Syrian Democratic Forces (SDF) resume their fight against terrorist group Islamic State at the border with Iraq. The offensive had been shut down earlier because of the Turkish invasion of northwestern Syria.

IS previously ran a caliphate in Syria and Iraq, but little is left of it. Yet the jihadists still have territories in Syria. They have stepped up their attacks in recent weeks, said a spokeswoman for the SDF, a US-sponsored partnership of Kurdish and Arab militias.

The SDF has already driven IS out of large areas. The militias conquered Raqqa, the actual capital of the terror organization. They now focus their arrows on the last areas that IS has in the eastern border area. 'Our heroic forces will liberate these territories and secure the border,' said the spokeswoman.

Another SDF official said that he was consulted with Iraqi forces. It would have been agreed that neither side will cross the border.