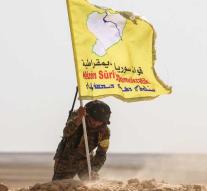 damascus - The political branch of the Syrian Democratic Forces (SDF) once again consulted with the Syrian regime last week. The vice-president of the so-called Syrian Democratic Council (SDC) said that in the capital Damascus there was talk about decentralization and the constitution.

The SDF is dominated by Kurdish fighters, who call their Unitary Defense Units (YPG) units. They have largely avoided direct confrontations with Assad's troops in recent years and were able to take in about a quarter of Syria with American aid. There the Kurds harnessed their own administrative systems that they also want to keep after the conflict.

The troops of Syrian leader Bashar al-Assad and their allies have now defeated other armed groups in large parts of the country. Assad warned earlier this year that his government is willing to negotiate with the SDF, but to free the areas that are in the hands of the militia by force. '