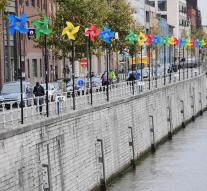 brussels - In the Brussels commune of Molenbeek Tuesday unveiled a sculpture to commemorate the victims of the attacks in Paris and Brussels. Both attacks were residents of Molenbeek involved as perpetrators. The artwork 'Flame of Hope', which is inspired by Arabic characters, is revealed by the mayor of Molenbeek.

Molenbeek artist Moustapha Zoufri was working on a sculpture in the course of fifty years of Moroccan immigration in Belgium, but decided to change the subject. ' It is now 35 years that I work with young people and it seemed to me quite unusual that young people have done, '' he told news agency Belga. ' On the other hand, I wanted to express that all Mill Bekenaren distance themselves from what happened. ''

The Belgian federal government announced last week that a monument erected to commemorate the victims. Which will be unveiled on March 22 2017, exactly one year after 32 people were slain in the attacks on the Brussels Zaventem Airport and Maelbeek Metro Station.