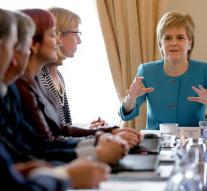 - The regional government of Scotland is preparing legislation to write a second referendum on its independence from Britain. At the same time she wants to talk to European institutions on the position of Scotland within the European Union. That said, the Scottish Minister Nicola Sturgeon Saturday.

She said that a second independence referendum,, is an option that is on the table. ''

In the referendum on British membership of the European Union agreed Scotland by 62 to 38 percent to remain in the union, while the mood across Britain was 52 against 48 percent for retirement. These results justify a second referendum on independence, says the Scottish Government.


In 2014, being Scottish voters separation of Scotland from the United Kingdom still 55 to 45 percent.