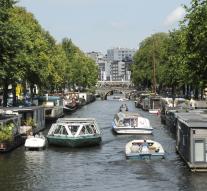 - "The canals are the next five years the scene of a research program on self-steering boats. It is the first large-scale test how 'roboats' people and can transport goods. Watch also test with autonomous vessels that can build itself within a few hours, for example, a movable bridge or floating stage."

"In addition, the researchers are engaged with underwater robots, for example, can perform measurements in the sewage system and roboats stripping the canals of waste and debris, such as 12. 000 bikes annually to disappear."

"Possible research also contributes to reducing the burden on the water. Amsterdam already recently announced measures such as lowering the speed limit from 1 January. According to AMS Institute is the goal to have actually self-steering boats in Amsterdam's canal over five years."