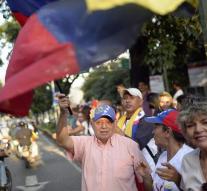 caracas - Armed gangs have tried to disrupt the polling in Venezuela on Sunday. They'd shot two people in a suburb of Caracas and injured four others. That's a spokesman for the opposition, who said the non-official public consultation against President Nicolás Maduro.

Carlos Ocariz, speaking on behalf of the 'Democratic Unit', said that 'paramilitary' shooters appeared in Catia in the afternoon, where thousands of people gathered to hear their protest and open the fire. 'It seems that there are two dead people to regret,' said Ocariz to reporters.