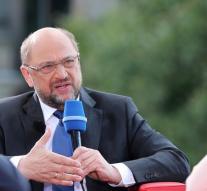 berlin - Martin Schulz chose the attack in the run-up to the German elections on September 24th. The candidate for the Chancellor's SPD candidate is rival Angela Merkel that she has come loose from the ground. She lost her sense of reality and lost contact with the citizens. 'Many people have the impression that Angela Merkel is absent,' said Schulz on Sunday in an interview with the ARD.

The challenger in the election struggle also finds that the Chancellor reacts too hesitantly to the provocations of Turkish President Recep Tayyip Erdogan. 'How long do we want to watch for ourselves how Mr. Erdogan takes us to the nose,' said Schulz, referring to the journalist Deniz Yücel and other Germans stuck in Turkey.

Schulz also intervened in the debate on a ban on polluting diesel cars in certain urban areas to reduce nitrogen oxide emissions. 'Of course we need the combustion engine for a very long time,' he said.

Instead of putting the technology at its root, the SPD considers it wiser to invest in optimizing diesel technology. In this case, CDU / CSU and the Greens, potential coalition partners, are very far apart. 'Worse, it can not be black-green,' added Schulz.