Home / World / Schulz departing Brussels: it was an honor 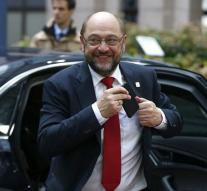 brussels - 'The European Union is in my view the most important project of the century. As president, I have tried to contribute to the visibility and democratic influence of the European Parliament. It was an honor. 'So said Martin Schulz Thursday in Brussels at the official announcement of his departure as parliament speaker.

The 60-year-old German Social Democrat party leader is for the SPD in the state of North Rhine-Westphalia for the elections in the fall of 2017, he confirmed earlier rumors. Schulz did not say a word about ambitions to become chancellor or foreign minister.

His departure in January opens the door for a new battle for the top posts in Brussels. According agreements should his successor be someone from the group of Christian Democrats, the European People's Party (EPP). The leader of the EPP Group, Manfred Weber, said in Strasbourg that the group decided on the candidacy in December.

If the EPP indeed, the new president, the three main EU institutions would be led by Christian Democrats. The President of the European Commission, the Luxemburger Jean-Claude Juncker, and the Polish 'EU President' Donald Tusk are members of the EPP family. To avoid this, according to some unthinkable scenario would be a liberal if the former Prime Minister of Belgium Guy Verhofstadt continue the high post to get.

Esther de Lange, CDA delegation and Vice-President of the EPP 'welcomes' the decision of Schulz. 'After two mandates of 2.5 years it is time for renewal,' she says.