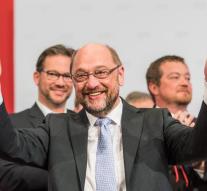 berlin - SPD chairman Martin Schulz still thinks despite the disappointing results of recent federal elections, the Social Democrats can win when it comes to the German parliament and the chancellor's office in September. That's what the party's party draftsman said Monday evening in the German RTL Journal, referring to the unanimous agreement with the election program. That makes it clear that the SPD has closed the ranks.

'I'm thinking that we can prove to be able to control this country and that we are serious. That is what we are going to do in the coming weeks. That is why we have also worked so carefully that the program has now been voted unanimously. That makes me pretty optimistic, 'said Schulz.