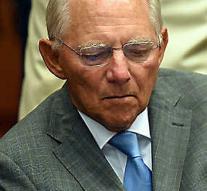 - The growing number of refugees in Germany makes it probable that the German government in 2016 for the first time in years a deficit in its budget. Then calculates the German Finance Minister Wolfgang Schäuble, the German magazine Der Spiegel suggested Sunday .

The deficit was because of the rapidly rising costs of receiving refugees . Which would , according to the Finance Ministry next year more than 10 billion euros.

There are probably billions needed to build houses for refugees. In addition, the states need more help from the federal government than the amount of 3 billion that has already been promised.

Germany did in recent years flexing its budget deficit to a surplus . Under the leadership of the country Schäuble strives for a balanced budget in all euro countries.