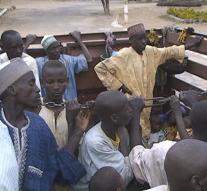 yaounde - Among the nine hostages last week were freed from the hands of terrorist group Boko Haram, were not the two hundred schoolgirls who were abducted in April last year.

Cameroon freed the hostages Wednesday in an operation involving hundreds of fighters of Boko Haram were killed.,null, The people are liberated ordinary villagers. The schoolgirls are not in that group, '' said Information Minister Issa Tchiroma Monday.Boko Haram abducted in April schoolgirls from their dormitories in Chibok, in northeastern Nigeria. This was followed by a lot of international protest, involving among others the American first lady Michelle Obama 's slogan " Bring back our girls' use.According to experts, the girls separated and housed in groups housed in villages scattered over a large area.
NEW