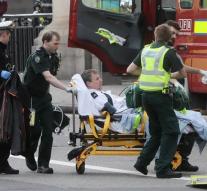 breda - Newman College in Breda which tonight would travel to London with a group of students, has canceled the trip because of the attack. That tells pupil Finette (14).

' We would call tonight leave for London, but we're at five by teachers to say there was bad news. '

The school would travel to the British capital with dozens of students, says Mavo-3 pupil Finette. She understands the decision: ' that risk should not take you. '

Yet Finette find it very unfortunate that the trip was canceled. ' Since I'm young, I want to go to London. Now it's finally going to happen, I'm looking forward to it since I'm in high school because I knew I was going to London. And it's not now. Fortunately, it is still moving, but it may take some time. '