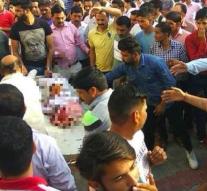 delhi - A bus accident in India has cost the lives of at least 26 students. The driver and two teachers were killed when the school bus hit the road in the northern state of Himachal Pradesh, reports Indian media.

Eyewitnesses say that the driver lost control over the steering wheel in a sharp turn. The bus then collapsed into a ravine. Residents of the area, according to witnesses, tried to save victims themselves, even before aid workers arrived.

Most victims are said to be very young. A police commissioner said that all deceased school children were younger than ten. The death toll can still rise. There would still be children stuck in the wreck of the vehicle. Nothing has been disclosed about their condition.