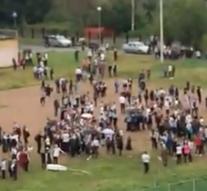 moscow - An armed Russian scholar of about fifteen years opened a fire in a classroom a high school near Moscow on Tuesday. According to the first messages there are some injured.

The boy would also have thrown with smoke bombs. The shooting took place in a school in the town of Ivanteyevka, about twenty kilometers northeast of the Russian capital.

The school has now been evacuated. On the internet, images of evacuation circulate. How the shooter is and how serious the victims are injuries is not clear.