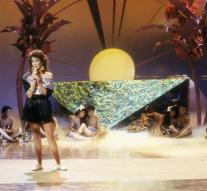 recklinghausen - The German schlager singer Andrea Jürgens died on Thursday after a short sick bed at the age of fifty in her residence Recklinghausen. That has disclosed her record company in Munich.

Jürgens was discovered when she was ten. The child star debuted at the end of 1977 in the New Year's Eve show of Rudi Carrell at the ARD. She sang the song 'Und dabei liebe ich euch begge'. The divorce song would be a big hit.

Jürgens grew into a favorite artist, also in the Netherlands, and sold millions of singles and albums. Her Christmas album 'Weihnachten mit Andrea Jürgens', released in October 1979, was in three months more than a half million copies sold. One of the songs was the ancient anthem 'Heidschi Bumbeidschi'.

After a number of years of relative silence, Jürgens again recorded a CD in 2016 and went on tour during the autumn. She had to break down early by illness.