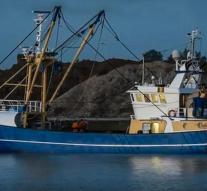 - AMSTERDAMThe complete crew of a fisherman from Urk will appear before the Amsterdam court on Tuesday morning because of the smuggling of 260 kilograms of cocaine. The party was transhipped in June on the North Sea from a container ship.

The catch was not a coincidence: the police had information that criminals from Amsterdam took coke through fishermen. In recent years hundreds of packets of cocaine have flushed on beaches along the entire coast. Presumably there was something wrong with the overload.

Five suspects were initially arrested: three Dutchmen, a Montegrin and a Pool. Last week, the police arrested another two men from Amstelveen and Hippolytushoef.

One of them is in close contact with Naoufal 'Noffel' F., a Amsterdam headpiece from the 'Mocromaffia'. It is suspected of ordering a liquidation in 2015. The man from Amstelveen was a day before the kotter picked up the coke, seen with the crew.

Information from the Ennetcom survey on encrypted communication via PGP phones between criminals led the police to the suspects.