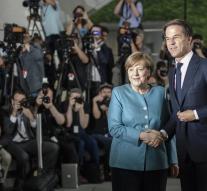 brussels - Thousands of activists set off for two funky days in Hamburg, where the G20 summit takes place on Friday and Saturday. But also in the room where the leaders of the world's economic superpowers meet, it is expected to be called on. In topics such as climate, free trade and migration, 'difficult discussions' are expected in neat diplomatic languages, especially with President Donald Trump.

Premier Mark Rutte can be there almost all the time. Chancellor Angela Merkel, who presides over the G20 this year, had invited the Netherlands as a host country; An honor that last ended in The Hague in 2010. The government also participated in ministerial preparations. In Ruttes wake, Jeroen Dijsselbloem (Finance) and Bert Koenders (Foreign Affairs) follow.

At the first working session, Friday morning, Rutte is not yet welcome. It is only for the permanent G20 countries, actually nineteen countries plus the EU. Of the 28 EU countries, there are also four separate G20 members, Germany, France, Italy and Great Britain. On behalf of the other Member States, EU President Donald Tusk and European Commission President Jean-Claude Juncker are present. Furthermore, there are other President Vladimir Putin (Russia), President Xi Jinping (China), Prime Minister Shinzo Abe (Japan) and President Recep Erdogan (Turkey).

The first session is about terrorism, a subject that is probably little controversy. At work lunch, if economic growth and trade are on the menu, it is undoubtedly the word protectionism. Several of his G20 disguises have already experienced the effects of Trumps 'America First'. He has withdrawn from the TPP Free Trade talks with Japan, among others, and wants to renegotiate the NAFTA agreement with Canada and Mexico. He also threatens to reduce steel imports.

Friday afternoon, another 'Trump topic' is being discussed: the undermining of the International Climate Convention concluded in Paris in late 2015. While all over the world promises to try to reduce CO2 emissions, thereby reducing the temperature rise, Trump pulled back from the treaty on June 1.

A dinner and concert will close on Friday, before the twenty-first Saturday, talk about migration, cooperation with Africa, digitalization and health. On this last theme, Rutte can keep an introduction.

Host Merkel ends the summit with a joint statement. It is becoming diplomatic to present the world beyond a united G20.