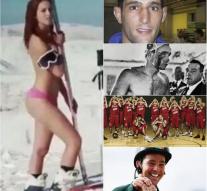 amsterdam - The Dutch gymnast Yuri van Gelder has to leave the Olympic Games in Rio de Janeiro after he had drunk Saturday night outside the Olympic village alcohol and only returned early in the morning. But Van Gelder is certainly not the first athlete who comes discredited during the Games. Five high-profile scandals in the games in a row.


Iranian judoka Arash Miresmaili was disqualified in Athens in 2004 after he had spent the night before his match against Israeli Ehud Vaks 'bunkering'. What was found? Miresmaeili wanted to competing against Vaks and to prevent a riot, he made sure that during the weigh two kilos too heavy.


The basketball teams of Spain thought to be his own way funny when they had qualified for the Olympics in China in 2008. When making the team photo were the players their eyes with their fingers narrowed, as a playful reference 'to the host country. The photograph, please note was printed in a Spanish newspaper, caused especially in China big fuss. The basketball players showed then find themselves there to feel uncomfortable and blamed the sponsor, who felt that it had to happen.

Just after the Hungarian uprising in 1956 was beaten down by the Soviets, the water polo teams of the two countries met in the Olympic pool in Melbourne together. Getting feared was true: the Hungarians were loaded revenge the pool. When the Hungarian leader refused to shake hands with his opponent from the Soviet Union was fighting the signal for a genuine game. In the water the waterpoloërs beat each other bloody. The game was eventually discontinued.

That the Olympic Games are plagued by doping incidents, is well known. But that a horse tests positive, happens. At the Olympic Games in Hong Kong was found at four jumpers doping in 2008. The animals were all fed capsaicin, a component of chillies that increases endurance. The equestrian circuit was overshadowed in 2004 by doping cases. When the Germans and the Irish moeste surrender their gold medals.

During the Winter Olympics in Sochi in 2014 gave the Lebanese skier Jackie Chamoun a stir when she appeared semi-nude on the Internet. The snapshots of Chamoun were part of a photo shoot for an Austrian skiing calendar. The authorities of the conservative Lebanon stood on their hind legs. The Lebanese Minister for Sport launched an investigation. The skier himself apologized and announced to understand the fuss.