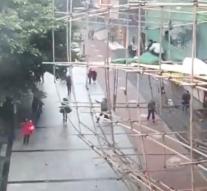 mianyang - Three construction workers were injured when a ten meter high scaffolding toppled over on a street in the Chinese city of Mianyang. The accident made video.

It shows how two of the construction workers, standing on top of the scaffold, are trying to cling with all his might.

The images can also be seen how then come to the rescue dozens of bystanders to lift the stage and thus to free the trapped workers. Miraculously no passersby were touched by the toppling scaffolding.

According to Chinese state television is one of the injured is serious condition. How the accident could have happened is unclear.