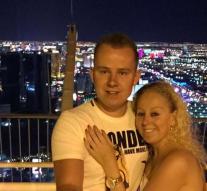 las vegas - Marc and Angela van Hoof walked on the street near the Mandalay Bay Hotel when they heard the gunfire.

'We sat there I think 150 meters away. My wife and I had to run for our lives! Actually, I did not believe it would be a shooting. When we walked to our hotel, we saw people cry and became groups we had to go there. The shots came closer and so we fled a casino. I think I heard 500 shots. Every time at short intervals. Probably the launcher was reloading 'Marc is now safe in his hotel, but does not leave the building anymore.

Manon Kemper wanted to take a taxi to a show from the Excalibur hotel when they were greeted by crying and running people. "We were also sent back in by the police immediately. It's a big chaos here. 'Manon does not know when she's out again.