Home / World / Saudi women can get a driver's license 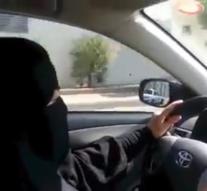 riaad - From June 2018, women can get their driving license in strict Islamic Saudi Arabia. That has determined Saudi king Salman.

For women in Saudi Arabia, it is not forbidden to drive in a car, but in practice it is not possible because they can not get a driver's license. There has been much protest against the law. Out of disrepute with the laws, women were driving.

Working groups of different ministries have already been formed to regulate the implementation of the Royal Decree. They report in thirty days according to the official Saudi press agency SPA.