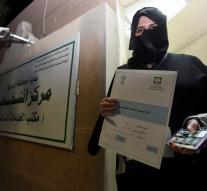 - For the first time in history, women in Saudi Arabia election. For the municipal elections of Saturday presented themselves according to the authorities, more than 6100 men and 865 women eligible. Of the 1.6 million voters who registered themselves, there are 136 000 women.

Voters may elect representatives for 284 local councils. In the kingdom, however, which in reality hardly power.

Women are strongly disadvantaged in Saudi Arabia. They should not drive and do not travel without the permission of father, husband or brother. They rarely unveiled outside the door. In recent years, they have however been given more freedom in education and professional life.