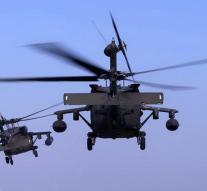 riyadh - A Black Hawk helicopter of the Saudi military is Tuesday crashed during a military mission in Yemen. All twelve passenger (below) officers were killed.

This was announced by the national news agency SPA. The crash took place in the province of Marib, east of the capital Sanaa. How this could happen is still being investigated.