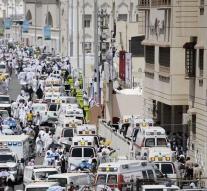 mecca - Two million people start Friday in the Saudi capital city of Mecca on the Hajj, the annual pilgrimage which every Muslim must make sure it can afford once in his life. Saudi Arabia is doing its utmost to avoid a repetition of the disaster of last year.

According to official figures came when 769 people died because they were oppressed. Figures from the countries which received the repatriated dead, however, that there were more than 2,000 casualties. Iran accused the organization of incompetence. This year no Iranians traveling to Mecca.

The hajj leads to the holiest places of Islam and follow a very tight schedule in order to handle the huge crowds. Thousands of people are employed to ensure that the pilgrims keep to the established schedules for the rituals. Especially the route to Jaramat, where the symbolic stoning of the devil takes place is equipped with electronic monitoring and gates. On that route occurred several times such disasters in the past.


Moreover, the pilgrims get electronic bracelets so that the authorities may well follow the flow faithful and timely alert if it gets too crowded at certain spots.

The hajj takes participating Muslims somewhere between 3500 and 30 000 and consists of several rituals, including the seven rounds around the Kaaba (Black Stone) is the best known.