Home / World / Saudi Arabia ready for woman behind the wheel 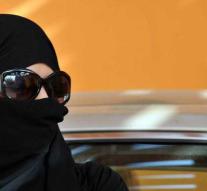 riyad - Saudi Arabia is ready with the preparations to let women drive from 24 June, according to Saudi state media. From that date, all women who can drive a car are allowed to drive themselves.

Traffic controllers are now informed about the changes, according to the Ministry of the Interior. Men are also called to point their female relatives to traffic rules, so that they can keep themselves and others safe.

For a long time it was illegal for women to drive a car in Saudi Arabia. In September last year, the Saudi king announced that he wanted to lift the rule. Earlier this month, several women's rights activists were arrested, creating doubts about the progressive developments in Saudi Arabia.