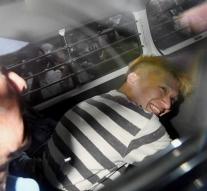 - Photos and footage of his smiling face after his arrest over the world went on. The 26-year-old Satoshi Uematsu was stabbed just nineteen people. Since the war had no man in Japan slain so many others. In an interview, he told police to have no regrets.

Uematsu himself worked in the facility in Sagamihara pool where he struck Tuesday. He killed the people, nine men and ten women in their sleep. After the killings, he turned himself in.

The killer for questioning was taken to Yokohama, Japanese media reported. There he told police that he had acted out of a desire to 'save' people with severe disabilities. But sorry, no. Uematsu had already approached politics with the proposal to establish by law that can be applied to disabled euthanasia out of compassion.