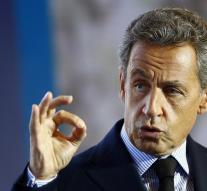 - Former French President Nicolas Sarkozy has his party held that unity is the key to winning the presidential election in 2017. 'We do not win if we are divided,' Sarkozy warned Sunday at a party meeting in the city of La Baule.

Despite his call to close ranks, the 61-year-old former president could not resist the temptation to mock a similar idea of ​​his rival Alain Juppé (71). Both men will take place on behalf of the Conservative Les Républicains in the Élysée, but must first win the primaries of the party.

Former Prime Minister Juppé had a day earlier called for a code of conduct to prevent conservative candidates blacken each other. Since Sarkozy showed little feeling for. 'I have nothing to do with a code to enforce good behavior. I have a thing for good behavior, 'he joked. 'If you need a code, it is because there is already a problem. '