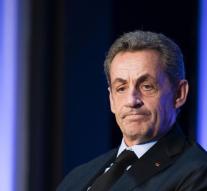 - French presidential candidate Nicolas Sarkozy promised Tuesday that he wants to help Britain to reverse the brexit, provided he is re-elected. He wants in this case negotiate with Germany on a new treaty for the European Union.

The new treaty would have to focus on the reform of the Schengen agreement, the area in which Europeans can travel freely, and cessation of accession negotiations with Turkey.

' I would say they voted for withdrawal against the British, but that a new treaty on the table and that they therefore have a chance to vote again, \'said the former French president in Paris.

' But this time you do not vote for the old, but the new Europe. Will you stay? The better. Because I do not want us to lose Europe's second largest economy, while negotiating with Turkey about EU membership. And it's a no, then it's still a no. You are a member or you're not, \'said Sarkozy.