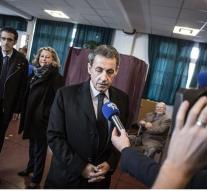 - The primaries in the center-right party Les Républicains leading up to the French presidential election appear for the former head of state Nicolas Sarkozy to walk out on a deception. After the counting of votes at least half of the more than 10,000 polling stations Sarkozy stands in third place.

Only number 1 and number 2 will advance to the second round of the elections next Sunday. According to the preliminary results is Francois Fillon at 43.6 percent, Alain Juppe at 26.7 percent and Nicolas Sarkozy at 22.9 percent.

The organization of the elections calls do not attach much value to the initial results, because it can change a lot. The first results come mainly from rural areas.