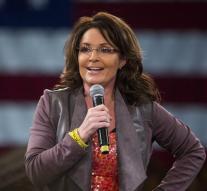 new york - Former Republican candidates for Vice-Presidency Sarah Palin have charged the New York Times newspaper for defamation. That made the newspaper itself known on Wednesday.

According to Palin, on 14 June, the newspaper made 'a false statement' about her in an article on the opinion page. Palin becomes associated with a shooting game in 2011, in which the Democratic congressman Gabrielle Giffords became seriously injured in that article, which concerns the shooting field at the baseball field where her fellow Steve Scalise became seriously injured.

The article links a link between both incidents, referring to a pamphlet from a political action group that campaigned for Palin. The pamphlet depicted Democratic Congressmen with a shooting disc. The article suggests that the pamphlet might have inspired the perpetrator of his shooting.

The New York Times had already sent a tweet after the article in which the newspaper took away the relationship between the pamphlet and the shooter. Palin is not pleased with this explanation and continues the case against the newspaper.