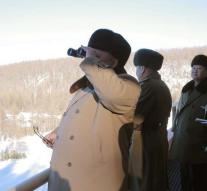 The sanctions that the Security Council Wednesday proclaimed following the fifth and hitherto most serious nuclear test. The underground explosion in September shook the ground into neighboring China. The US Geological Survey measured the quake with a magnitude of 5. 3.

Against North Korea were economic sanctions and an arms embargo. There comes a pack on. The country no copper, nickel and zinc export more and the country should should just carry on coal for up to $ 400 million annually. That equates to a reduction of 60 percent. Eleven officers be added to a blacklist of North Koreans.

Both the five permanent members China, USA, Russia, France and Great Britain, as all ten temporary members agreed to the strengthening of the sanctions.

North Korea has always defended with the argument that the country should be able to defend themselves nuclear program. The leadership in Pyongyang feels threatened by neighboring South Korea, with which it is formally still at war, and the United States.