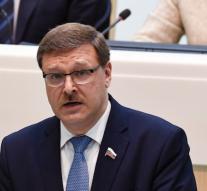 moscow - The new US sanctions against Russia for that country 'counterproductive and will harm the recovery of bilateral ties.' So Thursday night marked the first comment from a spokesman for the Foreign Ministry in Moscow.

The prominent senator Konstantion Kosachiov expressed less diplomatically. He called the expulsion of 35 Russians by the US 'the last throes of political look', referring to the imminent departure of US President Obama and his Democratic government. Kosachiov is chairman of the International Affairs Committee of the Federation Council, Russia's upper house.

Moscow previously made clear that will not go unanswered new US sanctions. A spokesman for the Kremlin said the penalties Thursday night 'a sign of the unpredictable and aggressive' foreign policy of the USA President Putin will decide how Russia responds.