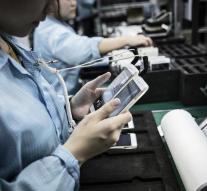 - Samsung plans to produce nearly 5 million units of the new smartphone Galaxy S7 before it is launched in February. Reported that the South Korean magazine Electronic Times.