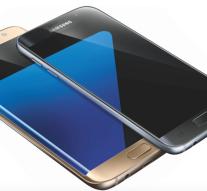 - Not only is the Samsung Note 7 turns incendiary, also the Galaxy S7 Edge can explode. That says an employee of a US telecom provider at PhoneArena. The anonymous source says a client to have had at the counter with exploded Galaxy S7.

If the story is true, the smartphone exploded during charging. Something has happened to more Note 7 devices. Contrary to what is often the case with smartphones exploded there was no use of a charger of a different brand.

Incidentally, it is not the first S7 which goes into the air. Last month, complained a man from Ohio Samsung because its Galaxy S7 would have exploded in his pocket. Also, the man claims to have used the original Samsung charger and-Battery.