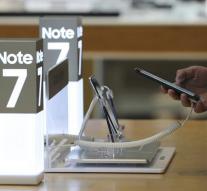 In the Netherlands, the launch of the phone already postponed because of the ongoing investigation into new problems with the device. Shortly after the launch of the Note 7 cropped up in a number of countries recover spontaneously igniting or exploding copies. Several people were injured. Samsung decided millions of devices to exchange. Now being made in various media reported seven swap devices also caught fire.

Samsung advises people who are in possession of the Note 7 to no longer use the device and turn off until the investigation.