Home / World / Salvini does not want a fight with EU ministers 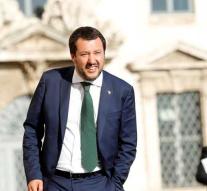 rome - The new Italian Minister for the Interior, Matteo Salvini, has announced that he wants to work closely with his EU colleagues, while still pursuing a hard line in the area of ​​migration issues. That reports the Italian news agency Ansa.

'What should I say to those who are afraid of this government? We are elegant, we smile, we are democratic, 'said the leader of the right-wing populist League Saturday just before the military parade during the Day of the Republic in Rome.

In the coming hours, he will talk to the other ministers of the interior of European countries 'with whom I will work together and will not dispute. '

On Friday, the new Eurosceptic government consisting of the Lega and the Five Star Movement was sworn in. Salvini had immediately made it clear that turning off 'i-legal' is a priority for him.

On Sunday, the Legaleider travels to Sicily: 'This is our limit. 'Most ships with migrants land in Sicily. 'I want to improve the agreements with the countries where the thousands of desperate people come from, in our own and their interests. '

On Tuesday, EU Interior Ministers meet in Luxembourg to discuss the reform of the Dublin Regulation, which regulates the treatment of asylum seekers. It is not clear whether Salvini will be present at the meeting, since on the same day the confidence in the new government in the Italian Senate will be pronounced.