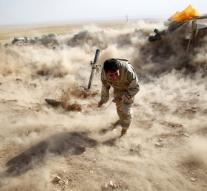 - The rescue mission that carried troops from the United States Thursday in Iraq, should not be considered according to the Pentagon as a tactical change. According to the US Department of Defense, there was "unique circumstances".

At the mission, which the US carried out together with Turkish and Kurdish fighters, some seventy hostages were freed from the hands of Islamic State. There were indications that IS was about to murder the hostages during a mass execution. The hostages were mostly Iraqi civilians, but also IS - combatants who were accused of spying.

An American soldier came to the rescue for life. In addition, several peshmerga were injured, reported a Pentagon spokesman. More than twenty IS- combatants were slain, six were arrested.