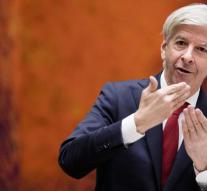 - Relatives of victims of aircraft accidents should be treated in a similar way when it comes to the wreck salvage. Which advises the National Ombudsman Reinier van Zutphen to Minister Ronald Plasterk of the Interior.

'In practice, municipalities decide how it is dealt with the disposal of plane wrecks. Sometimes be salvaged wrecks, sometimes not, 'Van Zutphen Friday. He also acts since 2014 as an advocate for veterans.

The Ombudsman makes the call Plasterk after the municipality of Echt-Susteren decided not to proceed to salvage a wreck of a bomber containing still part of the British crew. According to the council, there is no danger of explosion and therefore no need to salvage the wreckage.

The foundation Salvage Stirling W7630, named after the crashed unit had about complained to the Veterans Ombudsman.