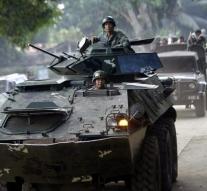 - A crew of an Indonesian tugboat after nearly two months in captivity escaped terrorist organization Abu Sayyaf in the Philippines. When his captors wanted to execute him was the 28-year-old sailor off, told a major of the Philippine Army.

In the dark managed to escape the first man running and then swimming. According to the Indonesian army officer feared that the extremist militants wanted to behead him. That fate recently fell two Canadian tourists fund.

The 28-year-old man was kidnapped on June 23 along with six colleagues. Members of the Islamic terrorist movement boarded their tugboat in waters south of Philippine Islands and captured the crew. The Philippine Army is looking for the others.


Abu Sayyaf maintains according to the Philippine army captured a total of fifteen people. One of them is the Dutchman Ewold Horn. He has been detained since early 2012.