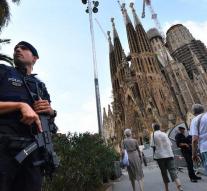 - The Catalan police evacuated the Sagrada Família basilica in Barcelona as part of an anti-terrorist action. According to the Spanish authorities, the press agency Reuters reports.

Also nearby stores are evacuated.

According to the police, an explosion service is under way to investigate a parked bus.