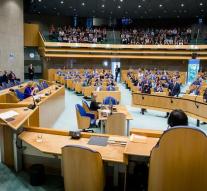 the hague - The House of Representatives has a crucial safety leak.

If necessary, one push is now required to make a fortress of the big meeting room. The measure was carried out in the weeks that the Lower House does not meet due to the summer recess.

If terrorists enter, access doors can be closed to the public gallery. The doors have been fitted with thick bulletproof frosted glass in recent weeks. This protects not only those interested in the public gallery, but also the parliamentarians, government officials and parliamentary staff in the plenary. Public gallery and meeting room are transformed into a mum into a kind of safe room. It would be a considerably easier way to provide protection than evacuating the victims in a terrorist attack.

Access to the large conference hall through the public gallery was a vulnerable security vulnerability, as was established after the invasion of Kurdish protesters in the Lower House hall in October 2014. The security analysis was further tightened after the terrorist attack on the editors of The French magazine Charlie Hebdo in January 2015. On several fronts, the security was subsequently reinforced. Thus, the robust armed Royal Marechaussee took over the security of the entrances from the police.

The placement of a glass wall around the public gallery has been contemplated in the past several times, but aside as it would affect the open character of the democracy's core stage.