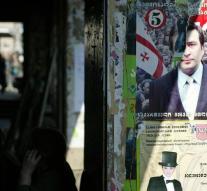 london - Former President of Georgia, Michail Saakashvili, opposes the decision of Ukrainian President Poroshenko to rid him of his Ukrainian citizenship. Saakashvili said Friday in a BBC news program to return to Ukraine to mobilize there.

In the program, the ex-president, who leads a opposition party in Ukraine, said that Poroshenko tries to disable his biggest opponent in this way. Saakashvili says he wants to put an end to the 'old and corrupt elite in Ukraine. 'According to the BBC's surveys, however, its trailers in Ukraine would only include 2 percent of the population.