Home / World / Ryan in clinch with Trump about migrant project 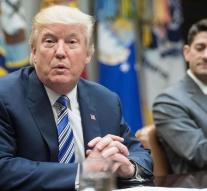 washington - President Paul Ryan of the US House of Representatives called on President Donald Trump not to stop the DACA immigration project introduced by Barack Obama. Republican Ryan said it is not Trump's task to see what's going to happen to the project and that his party mate can leave this better to Congress.

Obama introduced DACA in 2012. With the program, people who illegally came to the US as a child are protected from expulsion. These immigrants can also apply for a work permit. According to The New York Times, nearly 800,000 immigrants benefit from the scheme. Ryan said the authorities should give people 'peace of mind'.

During the election campaign, Trump said to withdraw and reverse DACA. According to the channel, Fox News, Trump is likely to announce very soon that he adds the act to the word.