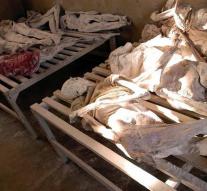 - The French court two former Rwandan mayors sentenced to life imprisonment for their part in the genocide of 1994. The court expects them the massacre of hundreds of Tutsis in a church in the village where they were alternately mayor.

The 65-year-old Tito Barahira and his co-defendant Octavien Ngenzi (58) of Kabarondo the mayor's office held at the time of the massacre, have always denied what they have been accused. They will probably appeal, said the lawyer of Barahira.

Extremist Hutus killed in 1994, more than 800 000 Tutsis and moderate Hutus. Many perpetrators are not brought to justice yet. Because the French court must also examine recently on the French public prosecutor can prosecute them abroad committed crimes against humanity.