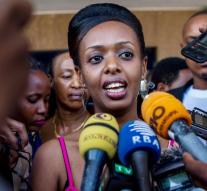 kigali - The Rwandan police arrested Diane Shima Rwigara on Monday the presidential election ruled out. The critics were held together with her mother and sister on suspicion of forgery and tax evasion.

'She is accused of tax evasion and secondly the use of fake documents in collecting signatures for her presidential candidacy,' said a police spokesman.

The electoral authorities forbade Rwigara to participate in the presidential election of August as challenger of Paul Kagame. According to the electoral commission, she had not submitted enough signatures and some of the names she had received from deceased persons. She denies the allegations.