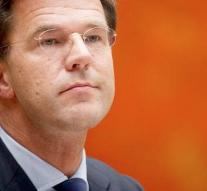 baghdad - Prime Minister Mark Rutte Tuesday visited the Dutch troops in Baghdad as training Iraqi special forces. The training is part of the Dutch contribution to the international coalition against Islamic State.

Rutte visited several training sites in the Iraqi capital. About 25 Dutch give the Iraqi elite soldiers there shooting-training and military emergency. is also taught to fight in urban areas.

Rutte also spoke with Iraqi Prime Minister Haider al-Abadi. Rutte stressed that there should be a reconciliation process underway in the Arab country between the Iraqi people and the need for political and economic reforms for a stable Iraq.


With Iraqi youth Rutte spoke about the future of their country. The Dutch embassy he met with Lise Grande, the humanitarian coordinator in Iraq of the United Nations.