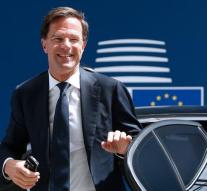 brussels - The EU seems to be having a good time, but Prime Minister Rutte is watching for optimism. According to him, the 'wrong kind of populism' did not win at the elections in the Netherlands and France, but real solutions should now be taken by EU leaders.

'This is not a final victory but an intermediate position. It has now gone well, but we have to deliver now, 'he said in Brussels where he is for a European summit.

In Brussels, the new French president Macron is the first of the party. The expectations about him are highly stressed. For Rutte it is clear that the country will have to reform. For the moment, he does not want to know anything about French plans for a European Minister of Finance or a eurozone budget. 'If they really reform, the pressure on the euro will be less,' he says.

He also points to Italy with his finger to do too much homework. 'The eurozone is on average worse than non-euro countries. That is not possible. '

In Brussels, European government leaders and presidents meet for a two-day summit. Among other things, agreements have been reached on closer cooperation in defense, for example in the case of joint purchasing of equipment.

SEE ALSO: European armies are going to work together structurally

British Prime Minister May will give an explanation of the Brexit during dinner. After the elections failed for the Conservatives, there has been great uncertainty about what the British now want exactly.

May then have to leave when the remaining 27 countries are joined by the main negotiator on behalf of the EU Barnier about the first Brexit talks. Who started this week.

The 27 should also see a procedure for the allocation of two UK EU agencies. They must leave the Brexit from London and almost every Member State on the arrival of one or both agencies. The Netherlands wants to get the European Medicines Agency (EMA) to Amsterdam.